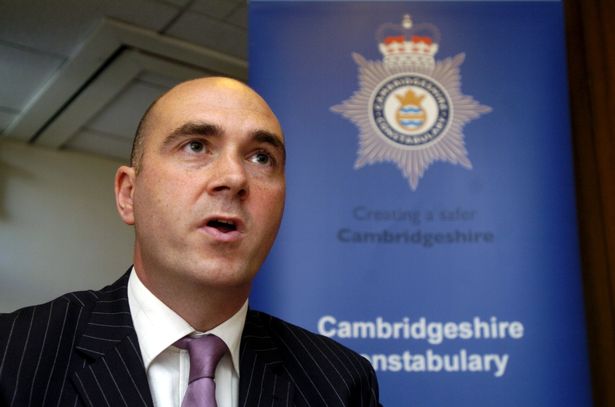 Richard Davies, 41, was shot at his home in St Neots after firing at police and threatening to kill his own children

Police have commended the firearms officers involved in the county's first ever fatal shooting, following the ruling of an inquest that they acted lawfully.

Richard Davies, 41, from Duck Lane, St Neots, died from a single gunshot wound to the chest following a standoff with police at his home on October 21, 2015.
He was pronounced dead at approximately 8.43pm, just 13 minutes after armed officers arrived at the scene.

It was the first time that Cambridgeshire Police had fatally discharged a weapon in the county.

Assistant Chief Constable Paul Fullwood, head of joint protective services for Bedfordshire Cambridgeshire and Hertfordshire police, said: “Officers had placed themselves between an armed and dangerous man and the public. To prevent an imminent risk to life an armed officer took the difficult decision to deploy their firearm to protect the public.
“Our firearms officers have an exceptionally difficult job and their specialist skills mean they are often faced with extremely dangerous situations when there is a threat to the life of others and themselves. They are highly trained for these circumstances to make split second decisions to protect the public and their colleagues.

“Following the shot, officers raced to the property to give Mr Davies first aid and then assisted the ambulance service when they arrived in a bid to save Mr Davies’ life."

It followed a two week inquest in front of a jury, which heard graphic details of the moments leading up to Mr Davies' death, during which it was revealed a Cambridgeshire policeman shot the tragic father-of-three dead to protect his colleagues .

ACC Fullwood continued: “Following today’s inquest conclusion of lawful killing our thoughts are with the family of Mr Davies at what must be an extremely distressing time for them.
Making the decision to shoot someone in a complex and dangerous situation is extremely difficult but something officers in the role know they could be required to do.
“On the night of this tragic incident officers knew Mr Davies was armed with a knife and had held his three children, threatening to harm them and himself. On arriving at the scene officers knew the children had escaped, but not how far, so their safety was still a major concern."

During the inquest the jury heard how Mr Davies had tied up two of his children and held a knife to their throats, tell him he would kill them if they didn't do what he said.

The dad of three also fired a gun at police, five times, before the fatal shooting .
ACC Fullwood explained: “When armed officers approached the property Mr Davies lent out of a window and fired a shot in their direction with a self-made unlawful firearm, which had lethal potential. Over the next couple of minutes armed officers pleaded with Mr Davies to put the gun down and come to the front door but he continued to fire a further four shoots in their direction.

“While our firearms officers volunteer to take on the additional responsibility of carrying a firearm we cannot underestimate the impact incidents like these will have on them. It is vital that when an officer shoots someone it is independently investigated.

"We remain grateful to all of our officers who regularly risk their own lives to protect others and the officers involved in this tragic case for the professionalism and bravery they have demonstrated throughout.”