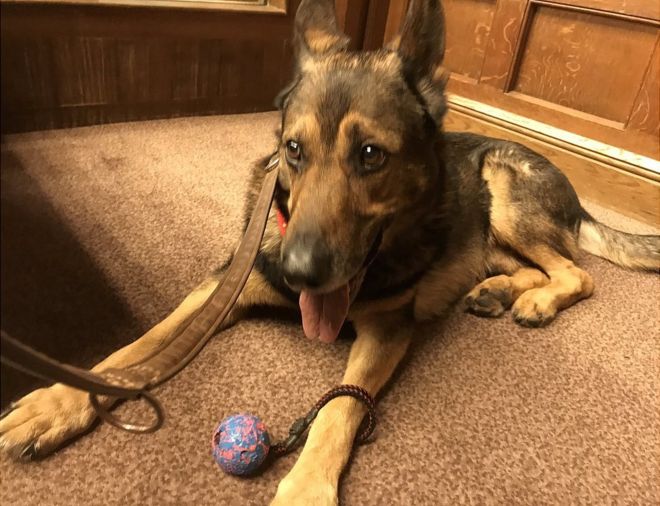 A wounded police dog that inspired proposed laws to protect service dogs and horses watched in the House of Commons as MPs backed the legislation.

Finn's Law - named after a dog who was stabbed on duty - aims to prevent attackers claiming self-defence.

The German shepherd and his handler PC Dave Wardell sat in the gallery as the Animal Welfare (Service Animals) Bill passed its third, and final, reading.

It will now face further scrutiny in the House of Lords.

The proposed law - an amendment to the Animal Welfare Act 2006 - was introduced by Sir Oliver Heald, Conservative MP for North East Hertfordshire.

PC Wardell said the dog - now retired - saved his life when a robbery suspect turned on them with a knife in Stevenage in 2016.

Finn was stabbed in the chest and head and was not expected to survive.

MPs heard such a charge essentially treated the dog as if he was a piece of police property.

Sir Oliver said he was "delighted" the bill had passed through the Commons and the "unanimous all-party backing... augurs well for its next stages".

"We are on the way to proper legal protection for police dogs and other service animals," he said.

Kevin Foster, Conservative MP for Torbay said: "A service animal is different to any other piece of equipment, it feels pain... this is not like a truncheon being broken."