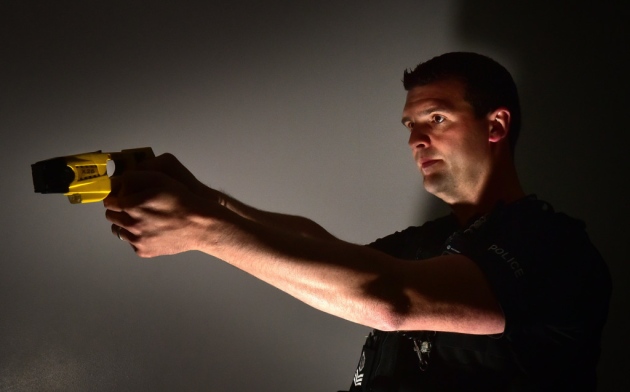 Every response officer in Norfolk will have the option to arm themselves with Taser by 2021, the chief constable has said.

But he stopped short of meeting calls from the police federation to allow all front line officers the option of equipping the stun gun due to the “significant cost”.

Simon Bailey told the accountability forum on Thursday more than 60 officers are in the process of training to use Taser.

“A plan is being developed by specialist operations that every response officer who wants to be Taser trained an opportunity to do so over the next two years,” he added.

Police and crime commissioner Lorne Green has queried why beat managers were not being armed, as some felt “exposed” while on the job.

He said he had spoken to beat managers who said help could be “20 minutes away”.

“They sometimes say they are very vulnerable out there on the beat,” he said. “Some who have spoken to me have felt, on occasion, rather exposed.”

Norfolk Police Federation has been campaigning for a roll out of Taser to every officer who wants one.

Andy Symonds, chair of the Norfolk Police Federation, has said all response officers need to be armed due to “the level of violence within the criminal community”.

“Front line officers can find themselves in dynamic situations that can turn very quickly in to severe violence,” he said.

“To have a Taser when they turn up there is a definite change in environment.”

The Federation ran a survey in May, with 414 officers responding. More than half reported their life had been in “serious danger” at least once in the last two years, and 69pc said they were unsatisfied with the level of armed support in the county.

“Because of the dynamics and logistics of our county we are spread quite thinly,” added Mr Symonds. “Officers want it there and then if a situation turns.

“We have incidents where it has turned very quickly to be quite violent, and the nearest back up can be quite a long way away. Taser can help control the situation when it has got to that level.”

A recent Cambridge University study has suggested officers carrying Taser are 50pc more likely to use force than those who don’t.

Mr Bailey said extending training to more officers “has to be based on our strategic threat assessment”.

He added: “Do I feel I need to equip an additional 104 beat managers with Taser? I do not, and I think there are many who simply would not want to carry it.

“All of this comes at a significant cost and I am having a balance a budget. Very rarely will our beat managers get involved in or deployed to a Grade A emergency call. They are not getting involved in that type of policing.”

“If one of our officers presses that button saying I need urgent help, it is not 20 minutes away.

“The officers I am seeing sustaining injuries are invariably those responding to a violent incident.”

A Norfolk Constabulary spokesman said: “Taser is only carried by officers who are highly trained and who receive refresher training at regular intervals.

“Before deployment is considered an assessment is made based on the situation and the threat/risk presented.

“Taser is a very effective tool in resolving violent and threatening situations. It can be used to disarm and apprehend offenders and prevent them from hurting themselves or others. “Often when someone is confronted with the possibility that a Taser may be used against them, they are compliant without it having to actually be discharged.

“Norfolk Police adhere to strict guidance issued by the National Police Chief Council in relation to training of staff and policy surrounding the use of Taser and firearms.”

Assault on Police NPCC PFEW West Mids Police Protect The Protectors Welfare Support Programme Terror Threat Armed Police Firearms Officers AFO Home Office illegal firearms wellbeing welfare Terror attack Metropolitan Police Mental Health Police Scotland College of Policing Armed Police Numbers PTSD WSP PFOA ARV Taser
I have recently been medically retired from the police with PTSD following a serious injury on duty a few years ago. I would not be here if it was not for the PFOA - they literally saved my life. In February 2017 I was long-term sick off of work and I was in a very bad place. Whilst I have been unable to continue as a serving officer, I will forever be indebted to the PFOA. I will never be able to repay them for all that they did. All I can say is thank you so much from me and my family.
PFOA assisted by offering counselling/coaching support to officer’s family. A respite break was granted to allow the officer and his family to get away and spend some valuable time together as a family unit.
The PFOA purchased a new cross trainer and have loaned this to the officer to enable him to remain active and hopefully return to Ops.
PFOA arranges support for the officers involved prior to the Inquest and after by way of a respite breaks and NLP Coaching or Counselling.
I would like to personally thank the PFOA for the gifts we received for our daughter. The timing could not have been better. the week the gifts arrived, she had lost her hair and was due to go back to hospital for her next round of chemotherapy treatment which she was not looking forward to. Opening the parcel put a big smile back on her face for two reasons. firstly, because you had chosen as gifts exactly what she would have chosen for herself. But secondly and more importantly, because she realised other people ere also thinking of her and willing her to get better. People she had never met.
Thank you so much for the shopping vouchers, they will come in very handy. Thank you for helping my daddy to be himself again. Keep helping police officers because some people don’t understand how hard it can be and they are doing a great thing.
This act of kindness was greatly appreciated by us both at what is a very difficult time for our family.
© 2017 PFOA - Police Firearms Officers Association
Head Office: Chatteris Police Station, 18 East Park Street, Chatteris,
Cambridgeshire PE16 6LD - Tel: 01354 697 890
Email: info@pfoa.co.uk