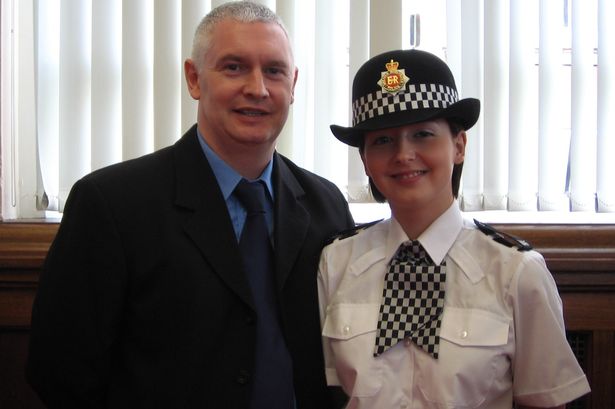 All the Staff and membership of the PFOA thoughts are with the family and colleagues of Pc Nicola Hughes and Pc Fiona Bone who were murdered five years ago today.

Nicola Hughes and Fiona Bone were murdered by Dale Cregan after they were called out to a house in Mottram in Longdendale on September 18, 2012
Five years ago today Dale Cregan, a fugitive who had already slaughtered two gangland rivals, dialled 999 to make a bogus report of a burglary.
His aim was to kill police officers - any police officers - in a perverse act of revenge: he was furious at what he deemed to be the unfair focus on his family, and in particular his mother, while he was on the run.

Hiding out in a house in Mottram in Longdendale, he waited for police to respond to his entirely false report of a crime: shortly before 11am, he opened fire on two unarmed, unsuspecting, female officers as they approached the front door and then he threw a hand-grenade onto their terribly injured bodies. He had murdered PCs Nicola Hughes, 23, from Saddleworth, and Fiona Bone, 32, from Sale, in a crime that shocked the nation.

Here, in his own words, Nicola’s father Bryn, 53, a former prison officer, talks about a day he will never forget and how he still struggles to come to terms with the futility of her murder.

“I remember what happened minute by minute. I was driving home in my Volvo when I got a phone call. It was about 2pm. It lasted no more than two minutes. I was working at Wakefield prison at the time and I’d just been interviewed for a promotion. Usually I’d have the radio on in my office and I would have heard there was breaking news and two police officers had been shot.

“I’d have probably called her to see if she was okay. But I’d been concentrating on this interview so I had the radio off that day. I answered the call and the guy identified himself as a DCI from Oldham. At first I thought it was something to do with some training for police with the prison. Nicola had talked about it with me.

“I told the detective: ‘I know what this is about’ and he said ‘no you don’t - I need to speak to you’.
“I asked him what it was about and he said he was waiting outside my house and he’d rather speak to me in person. I said: ‘Why? What’s it about?’

“I kept asking but he wouldn’t say. I remember I said: ‘No, tell me now!’ I’d driven over to see Nicola the night before. I can’t even remember what it was for. I spoke to her for five or ten minutes about something and went straight back home. I never even got out of the car. I thought she’d said she was off for the next five days. She leaned through the window to give me a kiss and then went inside.

That was the last time I saw her. I remember it was a bit chilly. Nicola was always cold. So I thought this call from the detective was nothing to do with Nicola. But I must have misheard. She must have told me she WAS working for the next five days.

“I suddenly thought this was something really, really serious. If she was injured he would have said she’d been injured. I said to him: ‘Don’t you dare tell me she’s dead.’

“I remember he said there was no easy way of him saying this. I think I said: ‘No, not my Nicky!’
“I always called her ‘my Nicky’. I just hung up straight away. I don’t think the detective actually gave me the bad news. I’d worked it out for myself, of course.

I must have driven 60 or 70mph back home and he was there. The rest of that day was a bit of a blur. I think your brain does something. It kind of closes down to protect you.
“I do have some sympathy with the detective who was sent to tell me. It’s not a job anyone wants to do. But I do have some issues with how I was told.

The incident was at 10.53am that morning. It was three hours later when he called. They had got through to Nicola’s mum at 11.30am. Technically, Nicola was still alive at that time in hospital. Nicola and I both have the same rare blood group and she gave my number in case I was needed to donate some blood.
“By the time the trial started I was having trauma counselling. It did help, although by the end it was counselling for its own sake.

“There was a real breakthrough for me last year when I tried EMDR therapy (Eye Movement Desensitization and Reprocessing). It was originally designed for combat veterans from Vietnam. It was recommended by my GP and it really worked. It’s not like normal counselling where you are asked things like: ‘How are you going to move on?’

“Well, I don’t want to move on because I don’t want to forget Nicola. I had about 18 hour-long sessions. Basically, it’s a way of tricking your mind to almost switch off the emotional side of your brain so you can think about things rationally. There are a few ways they do it but for me I was sitting about a foot away from a TV screen watching a light move from left to right.

“It was a bit like Kitt, the car from the TV Knight Rider. The counsellor was sitting by my side. You identify three key areas to work on. For me, one of the hardest things was the way I was told on the phone while driving home. I wouldn’t say it was insensitive. I really felt for the guy who told me.

"It must have been a really difficult job for him but I think there could have been a lot more effort put into it. And then there was Nicola in the mortuary and going to the funeral. I found that very difficult. I never understood why I hated the smell of lilies. When we spoke about the mortuary and I was asked to describe going into the mortuary. I’m opening the door. As soon as I got in there was an instant smell of lilies. I could feel how cold it was. It was really, really strange.

“If you look at things normally and rationally, you know you can’t go back in time. You can’t change anything from your past. But the emotional side of your brain is constantly telling you that you need to go back in time, become a time traveller. It has definitely helped me.

I just couldn’t talk about that before. When you look at things practically and realistically, what can you do? You can’t change what’s happened. You have to carry on. Anyone who has experienced trauma will be able to tell you: you don’t eat or you forget to eat; you don’t sleep. You can’t function. All you want to do is sit at home, close the curtains and hide away.

"For me one of the most difficult things is understanding why it happened. If there’s a car crash, you can say it was driver error or something else that caused it. In Nicola’s case she was murdered. How do you explain a murder? Somebody murdered somebody else. For what reason? No matter how you look at it, there’s no reason for it. What reason have you got for killing somebody else? It’s not justifiable homicide. It’s not self-defence. You could quite easily spend the rest of your life looking for her, looking for answers and reasons and you know you will never get them.

“This kind of counselling really works, or it did for me. It’s the main reason why my charity is providing funding so others, kids mainly, get the benefit of it. And keeping extremely busy does help. These days I work 50 hours a week with my charity, the PC Nicola Hughes Memorial Fund. I organise a ball in Nicola’s memory every year. I sit on Government’s Victims’ Panel which meets every three months.

“It’s all about giving victims a voice. I’ve done the North Pole Marathon and the New York Marathon. I’m looking at doing the Great Wall of China Marathon and I’ll be walking from John O’Groats to Land’s End. I like to keep myself very busy.
“On Monday I’ll be at Hyde police station where there is a memorial garden for Nicola and Fiona. That’s where she worked. There will be a minute’s silence at 11am. You’re never sure what you’re going to be thinking at a moment like that.

“Time does things, but I wouldn’t say it makes things any easier. It numbs the pain, no doubt about it. I wouldn’t say my attitude has changed towards what happened. It’s still total disbelief.

She left that police station five years ago that day. What was she thinking as she drove out, wondering what sort of job she was going to? Will it be emotional? If I allowed myself to be emotional, I would be very emotional. It must be a male thing where you tend to hold it in and you don’t show your emotions. Inside you are screaming while outside you are trying to show your brave face.”