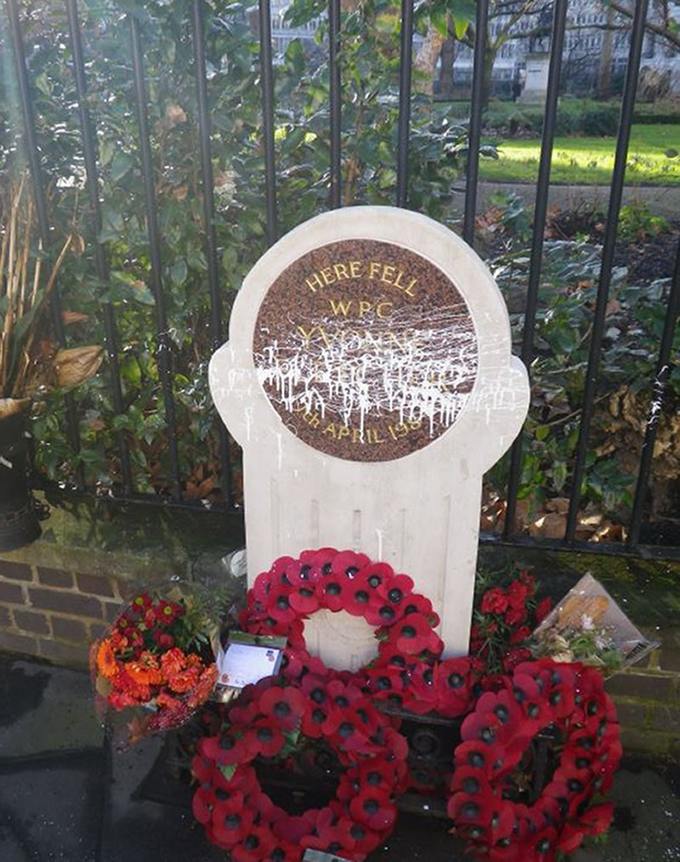 A retired police officer who was with Yvonne Fletcher when she was shot and killed policing a protest has offered a reward to help catch the vandal who splashed white paint on her memorial.

The memorial in St James’s Square where she was gunned down at a demonstration against Colonel Muammar Gaddafi was one of five statues targeted in a spate of vandalism.

Former Metropolitan Police officer John Murray was policing the protest outside the Libyan People’s Bureau in the square in central London on April 17, 1984, when a gunman opened fire.

Mr Murray was standing next to 25-year-old Pc Fletcher when she was shot and promised her as she lay dying that he would find her killer.

The 63-year-old from Chingford said  he is putting up a £100 reward from his pension for any information leading to the arrest and conviction of those responsible for the “heinous act” of vandalism.

Mr Murray said: “It’s disgraceful, when I saw the photograph I was just gutted.

“I go there once a year to lay flowers and I have done for the last 34 years.

“Because I was standing next to her that day and we changed places three or four times I think if we had done it once more it could have been me.

When I was with her I promised I would find out what happened.

“I regard it (the memorial) as almost a personal shrine, I made a promise to find out what had happened and every time I go there I repeat those words.”

No one has been brought to justice in connection with the murder of Pc Fletcher, with a suspect being released from bail in without charge and told the probe against him would not proceed “at this time”, the Metropolitan Police said in 2017.

A decision was made that crucial material cannot be used in court on the grounds of national security.

The Met is currently trying to trace the memorial vandal who is believed to have worn ski goggles and a face mask as he splashed white paint on five statues in central London.

Also targeted were the Canada Memorial in Green Park, the Royal Marines Graspan Memorial on The Mall and Bomber Command Memorial in London’s Green Park.

Police believe the suspect first struck at the Bomber Command Memorial before heading along the Mall towards Trafalgar Square, passing Canada House in the direction of St James’s Square, before ending on Jermyn Street.

The force said it received reports of the vandalism on Sunday and Monday and is treating the incidents as linked.

Detectives are trawling through CCTV and appealing for information and witnesses.

Assault on Police Protect The Protectors Terror Threat PTSD NPCC WSP Mental Health welfare Firearms Officers Terror attack Welfare Support Programme West Mids Police Armed Police illegal firearms Armed Police Numbers Police Scotland AFO ARV wellbeing PFOA Taser Home Office Metropolitan Police PFEW College of Policing
I have recently been medically retired from the police with PTSD following a serious injury on duty a few years ago. I would not be here if it was not for the PFOA - they literally saved my life. In February 2017 I was long-term sick off of work and I was in a very bad place. Whilst I have been unable to continue as a serving officer, I will forever be indebted to the PFOA. I will never be able to repay them for all that they did. All I can say is thank you so much from me and my family.
PFOA assisted by offering counselling/coaching support to officer’s family. A respite break was granted to allow the officer and his family to get away and spend some valuable time together as a family unit.
The PFOA purchased a new cross trainer and have loaned this to the officer to enable him to remain active and hopefully return to Ops.
PFOA arranges support for the officers involved prior to the Inquest and after by way of a respite breaks and NLP Coaching or Counselling.
I would like to personally thank the PFOA for the gifts we received for our daughter. The timing could not have been better. the week the gifts arrived, she had lost her hair and was due to go back to hospital for her next round of chemotherapy treatment which she was not looking forward to. Opening the parcel put a big smile back on her face for two reasons. firstly, because you had chosen as gifts exactly what she would have chosen for herself. But secondly and more importantly, because she realised other people ere also thinking of her and willing her to get better. People she had never met.
Thank you so much for the shopping vouchers, they will come in very handy. Thank you for helping my daddy to be himself again. Keep helping police officers because some people don’t understand how hard it can be and they are doing a great thing.
This act of kindness was greatly appreciated by us both at what is a very difficult time for our family.
© 2017 PFOA - Police Firearms Officers Association
Head Office: Chatteris Police Station, 18 East Park Street, Chatteris,
Cambridgeshire PE16 6LD - Tel: 01354 697 890
Email: info@pfoa.co.uk