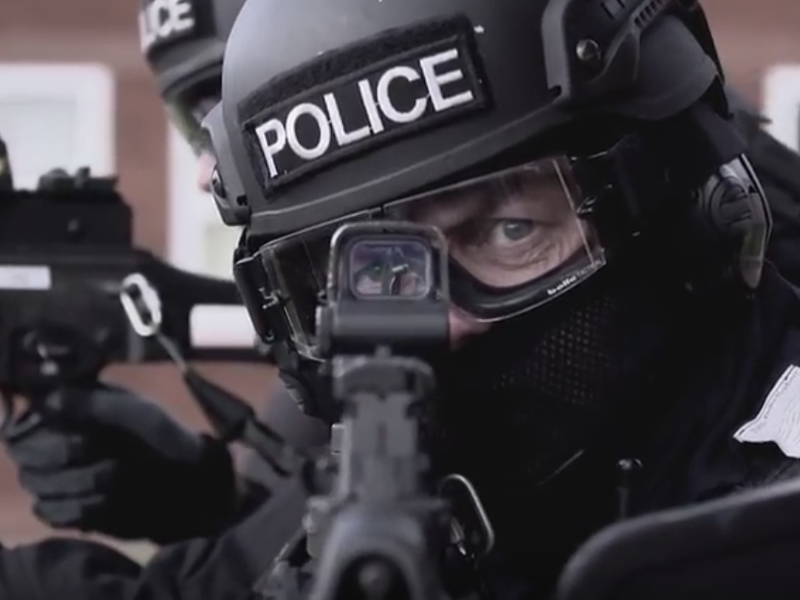 A new behind the scenes video reveals how armed police patrol Cornwall and Devon.

It is explaining how firearms the teams work and train, including what it means if you see an officer with a gun and the last time they had to shoot someone.

Scroll down to watch the behind the scenes video or read 'your questions answered' below.

Are all firearms officers male?
No. Across the Alliance there are both male and female officers.

Do firearms officers have to be certain age and/or rank?
No. Generally officers are constables, sergeants and inspectors. They can be any age providing they can pass the fitness tests.

Are firearms officers paid more than non-armed police officers?
No.

How long does it take to train to be a firearms officer?
The Initial Firearms Course is 11 weeks with refresher training throughout the year.

Are all firearms officers volunteers?
Yes.

Why do I sometime see officers with guns at incidents where there is no need for firearms, such as a road traffic collision?
Firearms officers have a standing authority to overtly carry a sidearm whilst on duty. They carry additional skills such as traffic policing, therefore will routinely assist at other incidents such as road traffic collisions (RTCs) and will also assist with general police duties as they are sworn constables.

Have Alliance Officers ever had to shoot anyone in Devon, Cornwall or Dorset?
Yes. The last shooting was in 2004.

How long would it take for armed officers to reach an incident that required the use of firearms?
The police aim to attend all immediate incidents with 15 minutes in urban locations and 20 minutes for rural locations. This is often very much quicker however is dependent on where the nearest police resource is at the time of the call.

What is an A.R.V.?
Armed Response Vehicle

What firearms are armed officers trained to use? What is contained in an A.R.V.?
An ARV carries weapons and ammunition, including less lethal weapons in order to deal with a spontaneous firearms incident. They also carry collision equipment such as signs, cones as well as enhanced first aid equipment such as blood and airway management, an automatic external defibrillator (AED) and oxygen.

I have seen armed officers with a side arm in a holster. What is it and does this stay with them all the time?
The preferred side arm for the Alliance is the Glock 17 pistol and will generally be carried whilst on duty under the standing authority.

Have Alliance firearms officers been deployed outside the three counties, to assist other police or security forces?
Yes. Mutual aid is often called upon for large events such as G8 Conference, Olympics etc.

wellbeing Home Office West Mids Police welfare PTSD Mental Health Armed Police Numbers Police Scotland Terror attack Taser Firearms Officers NPCC illegal firearms PFOA Welfare Support Programme Armed Police Terror Threat WSP Metropolitan Police PFEW AFO Assault on Police ARV Protect The Protectors College of Policing
I have recently been medically retired from the police with PTSD following a serious injury on duty a few years ago. I would not be here if it was not for the PFOA - they literally saved my life. In February 2017 I was long-term sick off of work and I was in a very bad place. Whilst I have been unable to continue as a serving officer, I will forever be indebted to the PFOA. I will never be able to repay them for all that they did. All I can say is thank you so much from me and my family.
PFOA assisted by offering counselling/coaching support to officer’s family. A respite break was granted to allow the officer and his family to get away and spend some valuable time together as a family unit.
The PFOA purchased a new cross trainer and have loaned this to the officer to enable him to remain active and hopefully return to Ops.
PFOA arranges support for the officers involved prior to the Inquest and after by way of a respite breaks and NLP Coaching or Counselling.
I would like to personally thank the PFOA for the gifts we received for our daughter. The timing could not have been better. the week the gifts arrived, she had lost her hair and was due to go back to hospital for her next round of chemotherapy treatment which she was not looking forward to. Opening the parcel put a big smile back on her face for two reasons. firstly, because you had chosen as gifts exactly what she would have chosen for herself. But secondly and more importantly, because she realised other people ere also thinking of her and willing her to get better. People she had never met.
Thank you so much for the shopping vouchers, they will come in very handy. Thank you for helping my daddy to be himself again. Keep helping police officers because some people don’t understand how hard it can be and they are doing a great thing.
This act of kindness was greatly appreciated by us both at what is a very difficult time for our family.
© 2017 PFOA - Police Firearms Officers Association
Head Office: Chatteris Police Station, 18 East Park Street, Chatteris,
Cambridgeshire PE16 6LD - Tel: 01354 697 890
Email: info@pfoa.co.uk