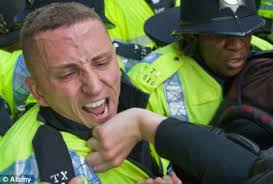 Attacks on police in London have risen sharply during the coronavirus lockdown, exclusive figures have shown.

Met Police figures showed 2,027 assaults on officers were recorded between May and July, a 38% increase compared with the same period in 2019.

Scotland Yard said the rise was partly driven by a series of high-profile protests and unlicensed music events marred by confrontations with police.

Assaults could have "long-term effects" on officers, the Met said.

The figures included Covid-related assaults, in which officers were spat at or coughed on - which often had multiple victims.

PC Nick Morley said he was "lucky to escape with his life" when he was flung from a moving car while on duty.

Mr Morley was left with a broken wrist and injuries to his leg after a routine traffic stop spiralled out of control.

"We pulled over a car because it was driving a bit too quickly," he told the BBC.

During questioning the driver tried to drive off but Mr Morley jumped into the car as a "reflex action".

"He sped off at full speed with me still in the car," he said.

"We got to 50mph and I thought to myself this is going to end really, really badly if I don't jump out.

"I remember making the decision to jump out of the car and then I remember rolling a couple of times as a hit the floor.

"I had a massive rush of adrenaline and I just lay down in the middle of the road and trying to take in what had happened."

Mr Morley, who is now a sergeant with the Westminster emergency response unit, said the incident was "always in the back of my mind".

"I'm not scared, but now as a supervisor it surprises me how often PCs get assaulted on a daily basis.

"In my opinion its getting worse and I don't know how to stop that."

Jamie Williams, 23, from Croydon was given a suspended 18 months prison sentence and disqualified from driving for two years over the assault.

Ch Insp Dave Brewster, who leads Operation Hampshire, the Met's plan for dealing with assaults on officers and helping the victims, said: "It is clear that assaults on police officers and staff are increasing year-on-year and the impact this has on our profession cannot and should not be underestimated.

"Assaults should never be seen as part of the job and officers should be able to go about their work without fear of abuse or attack. However we know that is not always the reality.

"The impact can have long-term effects on the individual that may not always be apparent and are not always physical."

Currently anyone found guilty of common assault or battery of a police officer, firefighter, prison officer or paramedic would face a maximum 12 months in prison.

Deputy mayor for policing and crime, Sophie Linden, said: "Our officers have been working tirelessly under increasing pressures to keep our communities safe during these challenging times.

"The violence we've seen directed at them is simply unacceptable and will not be tolerated.

"Police officers deserve our full respect and anyone who attacks an officer should feel the full force of the law."