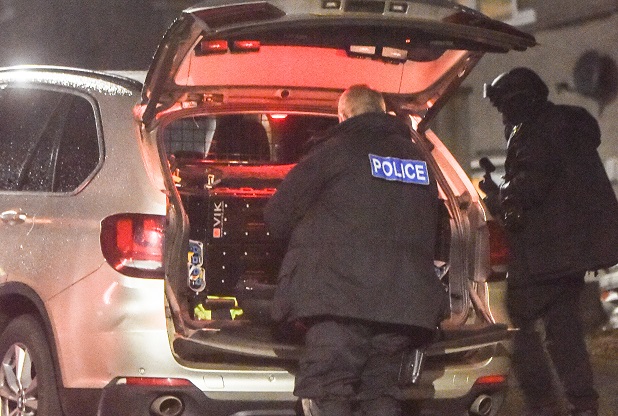 Plymouth Herald - An armed police officer was moments from shooting dead a man with a gun during a four-hour siege, a court heard.
The officer was about to pull the trigger when he saw Darren Morgan start to turn towards him carrying an air rifle at a window of his home.
Troubled Morgan, aged 51, later told a probation officer he was "better off dead at the hands of a policeman".
The armed officer told Plymouth Crown Court that in several years on response it was the closest he had ever come to shooting someone.
Jailing Morgan for two years and eight months, Recorder Jane Rowley said: "Only the police's expertise and training, which was severely
tested, meant there was no greater damage. It was moments away from shots being fired.
"The officers are to be commended for the calmness and diligence with which they dealt with the situation".
She added that the officers were not to know Morgan had an inoperable air rifle.
Dozens of police, including armed officers and trained negotiators, sealed off the property in Ernesettle that Saturday afternoon.
Chronic heroin user Morgan, who is suffering from alcohol-related brain damage, barricaded himself into his first floor flat.
The alcoholic claimed he had a Glock, a type of pistol, and repeatedly threatened to kill police in Hawkinge Gardens.
He confronted the armed officer at his lounge window while carrying what turned out to be a semi-automatic air rifle – which was later found to be inoperable.
Morgan pleaded guilty to possession of an imitation firearm with intent to cause fear of violence in two police officers on March 11.
He also admitted affray, or using or threatening unlawful violence, during the incident.
Tom Bradnock, for the Crown Prosecution Service, said Morgan called NHS Direct at 4.30pm and told the operator he had been refused his prescription for the heroin substitute methadone because he had been drunk.
He added during a rambling call that he was "ready to murder someone" and was going to burn the house down.
Police were called and armed officers quickly surrounded the one-bedroom first floor flat.
Mr Bradnock said officers tried to talk to Morgan but he seemed drunk and asked them to leave.
He added the defendant barricaded himself in, smashed the kitchen window and opened the lounge curtain.
The court heard he threatened to burn the flat down.
Mr Bradnock said: "He said to the officer: 'Is that a gun, I have got a bigger gun'. His demeanour was aggressive".
He added that officers spent more than half an hour trying to calm Morgan.
Mr Bradnock said Morgan told one armed officer he had a big gun and would get his Glock and added: "I will kill you all".
He added that the officers saw Morgan carrying a long-barrelled firearm at the lounge window.
Mr Bradnock said one armed policeman told him to put the weapon down but he instead turned in the "general direction" of the officers. He never pointed the gun at the police.
He added: "By that time the officer had raised his own weapon, had his finger on the trigger and was about to apply pressure.
"He later said that in several years as an armed response officer it was the closest he had been to shooting someone".
The court heard that the stand-off lasted another two hours before police smashed their way into the flat.
Morgan, by now carrying a broken broom handle, confronted the officers but was shot with a Taser through the broken door and subdued.
Police found a Logan semi-automatic air rifle, but it was so rusty it could not be fired. They also discovered two paintball guns.
Mr Bradnock said Morgan again repeated that he would kill the officers.
The court heard Morgan had 36 convictions for 73 offences, including violence and possession of knives, but nothing since 2009.
Nick Lewin, for Morgan, said that armed officers were confronted by the "nightmare" of having to shoot a man who ultimately was not armed with an effective weapon. But he added the defendant deserved sympathy for his sad predicament.
Mr Lewin said that Morgan had Korsakoff's Syndrome, a type of alcohol-related brain damage which left the sufferer with violent mood swings and a poor memory. He added that Morgan could not recall the incident.
Mr Lewin said that Morgan had turned to drugs and alcohol as a result of childhood experiences which were not of his making.
Tweet
Tags:
Siege Glock ARV Armed Police Negotiator
PFOA backs federation calls for Taser for all offi...
Top trauma surgeon tells of devastating injuries c...

Police Scotland Assault on Police Protect The Protectors illegal firearms ARV Taser wellbeing Firearms Officers welfare WSP Mental Health PFOA Metropolitan Police Home Office PSNI Terror attack PFEW Terror Threat PTSD IPCC Welfare Support Programme AFO Armed Police Numbers West Mids Police Armed Police
I have recently been medically retired from the police with PTSD following a serious injury on duty a few years ago. I would not be here if it was not for the PFOA - they literally saved my life. In February 2017 I was long-term sick off of work and I was in a very bad place. Whilst I have been unable to continue as a serving officer, I will forever be indebted to the PFOA. I will never be able to repay them for all that they did. All I can say is thank you so much from me and my family.
PFOA assisted by offering counselling/coaching support to officer’s family. A respite break was granted to allow the officer and his family to get away and spend some valuable time together as a family unit.
The PFOA purchased a new cross trainer and have loaned this to the officer to enable him to remain active and hopefully return to Ops.
PFOA arranges support for the officers involved prior to the Inquest and after by way of a respite breaks and NLP Coaching or Counselling.
I would like to personally thank the PFOA for the gifts we received for our daughter. The timing could not have been better. the week the gifts arrived, she had lost her hair and was due to go back to hospital for her next round of chemotherapy treatment which she was not looking forward to. Opening the parcel put a big smile back on her face for two reasons. firstly, because you had chosen as gifts exactly what she would have chosen for herself. But secondly and more importantly, because she realised other people ere also thinking of her and willing her to get better. People she had never met.
Thank you so much for the shopping vouchers, they will come in very handy. Thank you for helping my daddy to be himself again. Keep helping police officers because some people don’t understand how hard it can be and they are doing a great thing.
This act of kindness was greatly appreciated by us both at what is a very difficult time for our family.
© 2017 PFOA - Police Firearms Officers Association
Head Office: Chatteris Police Station, 18 East Park Street, Chatteris,
Cambridgeshire PE16 6LD - Tel: 01354 697 890
Email: info@pfoa.co.uk