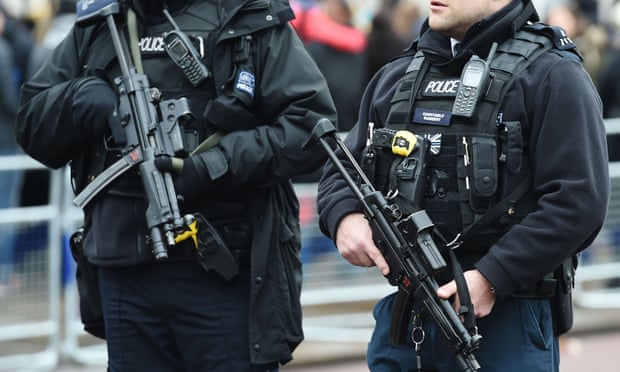 Hundreds of firearms officers may have to lay down their weapons because of new rules designed to detect those who have problems with their colour vision, the organisation that represents them says.

One officer is already taking court action over the new tests for colour vision deficiency, or colour blindness. Officers at a number of forces across England and Wales are affected.

The Police Federation says the changes could be discriminatory on the grounds of disability and gender, because most of the 6,459 armed officers in England and Wales are male, and men are much more likely than women to suffer from colour vision deficiency (CVD).

Supporters of the tougher rules say officers who, for instance, have problems seeing red, may have difficulty using electric stun guns, which uses red dots to help hit the target, as do some firearms.

Critics of the rules say colour vision deficiency makes a negligible, if any, difference to most officers’ ability to do the job. They also warn the loss of experienced armed officers comes at a time when police chiefs and the government want more armed officers to combat a severe terrorist threat.

Ché Donald, the vic-chair of the Police Federation, which represents 122,000 officers across England and Wales, said: “The test is intended to screen out CVD sufferers, yet we know from extensive research studies that the tests used are unreliable and does not achieve the objectives set out by the college and is not a proportionate means to achieving a legitimate aim.

“Previously, officers were required to pass on one of two CVD tests; they now need to pass on both. Retrospective testing is also taking place for those who previously undertook these tests and identified with mild CVD.”

Firearms officers are volunteers, so those affected are expected to return to other duties if deemed unsuitable to carry a gun.

In response to a string of terrorist attacks in Europe the number of armed officers in England and Wales was boosted, though it has been a struggle for police chiefs to achieve the rise in numbers.

Donald, himself trained as a firearms officer, said: “This single handedly could destroy the uplift. Hundreds will be affected. This is because CVD is mainly prevalent in the male population and firearms units are still predominantly composed of male officers and CVD affects one in 12 men (8%) and one in 200 women.

The federation says there were cases in forces including Devon and Cornwall, West and South Yorkshires, Essex, Humberside, Leicestershire, Nottinghamshire, Lancashire, City of London, the Ministry of Defence and the Metropolitan police.

The change were brought in by the College of Policing, which sets rules and standards across police forces in England and Wales. Its spokesperson said: “The key points which the standards establish are the ability to identify a subject based on a description, of which colour could be a significant factor, particularly where this may lead to pre-emptive use of force or officers using lethal force or firearms, and the ability to operate firearms with a ‘red dot’ sight system.

“However, the testing which officers have to undergo if they fail screening was updated last year. The changes do not exclude all officers with colour vision deficiency but only those below a certain threshold.

“The standards were reviewed based on the role, equipment and expert technical and medical advice on colour vision deficiencies.”

In Essex, a medium-sized force, there may be up to 10 armed officers affected, Donald said.

The force said: “Essex police is aware of the change to the colour vision standards set by the College of Policing and is working with our occupational health department, the Police Federation and the officers themselves to ensure that we manage any implementation appropriately.

“It is a priority for Essex police that no one is discriminated against and that the service we provide is not affected. Our firearms officers are rigorously assessed to ensure they are occupationally and operationally competent before being declared fit for duty.”

Testing for colour vision among police officers has advanced significantly. In the 1970s, the test involved showing recruits toy cars and asking them to identify what colour they were.

The former Met firearms officer Tony Long, who shot and killed three suspects during his 25-year career carrying a gun, suffered from colour vision deficiency. He said: “A lot of people are up in arms about it because it is nonsense. It’s some pen-pusher finding problems that don’t exist.

Long was acquitted in 2015 of murder by an Old Bailey jury after shooting a suspect dead. His difficulty seeing certain colours was not an issue at his trial nor at the inquiry that preceded it.

NPCC Taser Protect The Protectors PTSD AFO welfare Mental Health College of Policing Assault on Police PFEW West Mids Police Home Office Armed Police Numbers Police Scotland Armed Police Firearms Officers Terror attack Metropolitan Police PFOA ARV Welfare Support Programme illegal firearms Terror Threat WSP wellbeing
I have recently been medically retired from the police with PTSD following a serious injury on duty a few years ago. I would not be here if it was not for the PFOA - they literally saved my life. In February 2017 I was long-term sick off of work and I was in a very bad place. Whilst I have been unable to continue as a serving officer, I will forever be indebted to the PFOA. I will never be able to repay them for all that they did. All I can say is thank you so much from me and my family.
PFOA assisted by offering counselling/coaching support to officer’s family. A respite break was granted to allow the officer and his family to get away and spend some valuable time together as a family unit.
The PFOA purchased a new cross trainer and have loaned this to the officer to enable him to remain active and hopefully return to Ops.
PFOA arranges support for the officers involved prior to the Inquest and after by way of a respite breaks and NLP Coaching or Counselling.
I would like to personally thank the PFOA for the gifts we received for our daughter. The timing could not have been better. the week the gifts arrived, she had lost her hair and was due to go back to hospital for her next round of chemotherapy treatment which she was not looking forward to. Opening the parcel put a big smile back on her face for two reasons. firstly, because you had chosen as gifts exactly what she would have chosen for herself. But secondly and more importantly, because she realised other people ere also thinking of her and willing her to get better. People she had never met.
Thank you so much for the shopping vouchers, they will come in very handy. Thank you for helping my daddy to be himself again. Keep helping police officers because some people don’t understand how hard it can be and they are doing a great thing.
This act of kindness was greatly appreciated by us both at what is a very difficult time for our family.
© 2017 PFOA - Police Firearms Officers Association
Head Office: Chatteris Police Station, 18 East Park Street, Chatteris,
Cambridgeshire PE16 6LD - Tel: 01354 697 890
Email: info@pfoa.co.uk