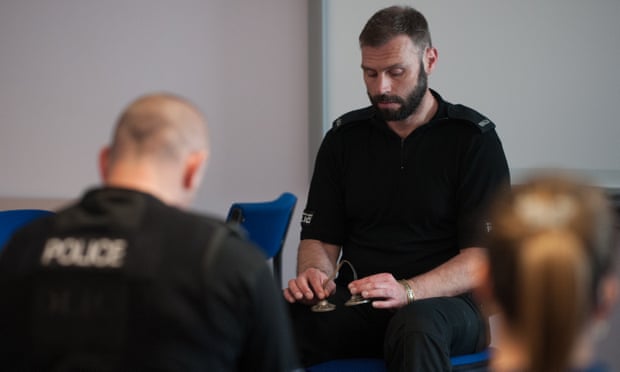 College of Policing to fund trial for more than 1,500 officers to combat stress-related sick leave

On Thursday afternoon, a dozen novice police officers straightened their backs, closed their eyes and started to meditate for the first time. “You are going to face things in this career that your family and friends will never face,” said their trainer, DI Jenni McIntyre-Smith. “To be able to deal with that is important.”

She asked the first-year Bedfordshire police constables to focus on their breathing, the sensations in their bodies and to observe their thoughts, techniques derived from Buddhist meditation which might soon be as integral to an officer’s training as how to wield a truncheon.

The College of Policing is to fund a trial of a secular version of mindfulness training for more than 1,500 officers in part to combat soaring stress and anxiety in the service, which has forced record numbers to take time off sick in the past year. Its backers hope to improve officers’ management of high-adrenaline confrontations, make them more alert when gathering evidence, improve listening skills when dealing with witnesses and victims and even help firearms officers make better decisions.

Demand for the police’s “Mindfit Cop” course was high in what is often considered a macho profession, with places filling up in less than a week. Four hundred and fifty-seven officers in Avon and Somerset and 300 in South Wales will take the eight week course, alongside colleagues from Hertfordshire, Bedfordshire and Cambridgeshire.

The rollout after that could be significant. Nerys Thomas, the head of research at the College of Policing, said: “If the responses are positive we would then look to make this available to all forces in England and Wales.”

The move is indicative of fast growing interest in mindfullness in public services – even as scientists continue to study how effective it actually is. More than half a million schoolchildren and 3,000 civil servants have been introduced to the techniques; there are 30 programmes for prisoners and prison officers and courses are offered to nurses and doctors in several NHS trusts.

More than 200 MPs and peers have taken a course, although, as McIntyre-Smith joked to her recruits in Bedford that may not have been the best advert.

There are early signs of possible effectiveness in policing. An initial trial in Bedfordshire suggested work-related-burnout was, on average, lower for 72 people who used the techniques and an internal report concluded: “Participants reported sleeping better, being able to reduce pain medication and feeling calmer and less reactive.”

Modern mindfulness emerged in the US in the 1970'swhere it was developed to help seriously ill people manage pain. It has since spread globally, popularised by apps such as Headspace.

Mindfulness-based cognitive therapy is recommended by the National Institute of Clinical Excellence to treat recurrent depression.

Stress is a serious problem for the police. Nearly 10,000 officers, equivalent to one in 12, took time off sick with stress or anxiety over the past year, according to figures released this summer.

A hundred officers from constable rank to superintendent in Bedfordshire have taken a course, which includes a day staying silent. Among them was Sgt Karen Jarman, who was off work for seven months with post-traumatic stress disorder after she was beaten unconscious during a routine drugs search.

She said it had enabled her to overcome severe anxiety and get back to work. She now uses the techniques when deployed, which last week included being first on the scene of a murder.

“You are getting into high-stress situations and as a supervisor you need to be calm,” she said. “We were driving under blue lights but I was talking to myself and concentrating on my breath and making it slower.”

Another sergeant, who asked not to be named, said: “I encounter difficulties when attending incidents with weapons, due to being the victim of a nasty stabbing. I have received a lot of support and assistance to build coping strategies, none quite as effective as the three-part breathing technique which forms part of Mindfit Training.

“When a job comes in where a person is armed with a knife and I am the closest unit to attend, I would always feel this is a difficult situation. The breathing technique gives me strength in those moments.”

Metropolitan Police illegal firearms Armed Police WSP Taser PFOA PTSD Protect The Protectors Mental Health Home Office Police Scotland NPCC West Mids Police AFO Assault on Police Terror Threat welfare Welfare Support Programme College of Policing wellbeing PFEW Terror attack Armed Police Numbers Firearms Officers ARV
I have recently been medically retired from the police with PTSD following a serious injury on duty a few years ago. I would not be here if it was not for the PFOA - they literally saved my life. In February 2017 I was long-term sick off of work and I was in a very bad place. Whilst I have been unable to continue as a serving officer, I will forever be indebted to the PFOA. I will never be able to repay them for all that they did. All I can say is thank you so much from me and my family.
PFOA assisted by offering counselling/coaching support to officer’s family. A respite break was granted to allow the officer and his family to get away and spend some valuable time together as a family unit.
The PFOA purchased a new cross trainer and have loaned this to the officer to enable him to remain active and hopefully return to Ops.
PFOA arranges support for the officers involved prior to the Inquest and after by way of a respite breaks and NLP Coaching or Counselling.
I would like to personally thank the PFOA for the gifts we received for our daughter. The timing could not have been better. the week the gifts arrived, she had lost her hair and was due to go back to hospital for her next round of chemotherapy treatment which she was not looking forward to. Opening the parcel put a big smile back on her face for two reasons. firstly, because you had chosen as gifts exactly what she would have chosen for herself. But secondly and more importantly, because she realised other people ere also thinking of her and willing her to get better. People she had never met.
Thank you so much for the shopping vouchers, they will come in very handy. Thank you for helping my daddy to be himself again. Keep helping police officers because some people don’t understand how hard it can be and they are doing a great thing.
This act of kindness was greatly appreciated by us both at what is a very difficult time for our family.
© 2017 PFOA - Police Firearms Officers Association
Head Office: Chatteris Police Station, 18 East Park Street, Chatteris,
Cambridgeshire PE16 6LD - Tel: 01354 697 890
Email: info@pfoa.co.uk