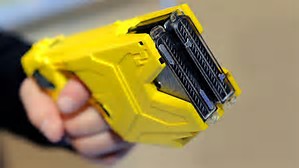 The Met Commissioner has today, Tuesday, 20 June, announced her decision to equip an additional 1,800 officers across the Met with Taser to better protect the public and officers from the threat of violent incidents.

The move will see a further 1,867 police officers carry the personal protection equipment on the front line, bringing the total number trained and carrying Taser to over 6,400 officers.

This decision has been taken by the Commissioner following an increase in violent crime, including knife crime, as well as a steady increase in the number of assaults sustained by police officers in recent years.

Commissioner Cressida Dick, said: “Keeping the public safe from harm is at the heart of our job. With this uplift, my officers will be better equipped to protect the public and themselves. We know that the mere presence of a Taser is often enough to defuse a dangerous situation and often get a suspect to drop their weapon if they’re armed.

“Taser reduces the need for physical contact and also the risk of unintended or unnecessary injuries to all parties. With the roll-out of body worn camera to every uniformed officer, the public can also rest assured that the use of Taser is correctly recorded and monitored and that the use of it is subject to comprehensive scrutiny.”

Over the past three years the vast majority (87 per cent) of occasions where a Taser was drawn have been resolved without the officer having to discharge it, meaning a violent or potentially violent situation is de-escalated and brought to a swift conclusion.

Officers from across the Met are equipped with Taser, with borough officers making up the majority of deployments; local borough officers are often the first to arrive at the scene of a serious incident.

All officers have to go through a selection and training process to ensure they are equipped with the right aptitude and skills to use Taser on the front line. Around 1,730 of the newly-trained officers will be from boroughs, with the remainder based on other specialist units across the Met.

All use is strictly recorded and monitored both within the Met and independently by the Home Office and MOPAC (Mayor’s Office for Policing and Crime). In addition, every uniformed officer equipped with Taser will be equipped with body worn camera by the end of 2017, giving further transparency to how it is used by officers. Figures on its usage on every London borough are also published quarterly on the Met’s website.

Taser has been safely and effectively used by the Met since 2003 and along with other tactical options, such as baton, cuffs and CS spray, is considered when officers are faced with violence or threats of violence that officers would need to use force in order to protect either the public, the subject themselves, or fellow colleagues.

Taser creates space between the subject and police, reducing the need for physical contact and also the risk of unintended or unnecessary injuries to all parties.

Currently, the Met’s policy is for officers carrying Taser to be “double crewed” (i.e. two equipped officers are deployed together). However, this will also change with the uplift, with the Met falling in line with national guidelines adopted by the majority of other police forces where response officers will still be deployed in twos, but only one need be equipped with a Taser, as well as enabling officers on single patrol to carry Taser.

The uplift will begin over the coming weeks and the training programme is expected to take around two years.

Assault on Police Terror attack Taser WSP AFO Protect The Protectors College of Policing Police Scotland Welfare Support Programme Home Office wellbeing NPCC West Mids Police PTSD welfare Mental Health Armed Police Armed Police Numbers Metropolitan Police Firearms Officers PFEW ARV Terror Threat illegal firearms PFOA
I have recently been medically retired from the police with PTSD following a serious injury on duty a few years ago. I would not be here if it was not for the PFOA - they literally saved my life. In February 2017 I was long-term sick off of work and I was in a very bad place. Whilst I have been unable to continue as a serving officer, I will forever be indebted to the PFOA. I will never be able to repay them for all that they did. All I can say is thank you so much from me and my family.
PFOA assisted by offering counselling/coaching support to officer’s family. A respite break was granted to allow the officer and his family to get away and spend some valuable time together as a family unit.
The PFOA purchased a new cross trainer and have loaned this to the officer to enable him to remain active and hopefully return to Ops.
PFOA arranges support for the officers involved prior to the Inquest and after by way of a respite breaks and NLP Coaching or Counselling.
I would like to personally thank the PFOA for the gifts we received for our daughter. The timing could not have been better. the week the gifts arrived, she had lost her hair and was due to go back to hospital for her next round of chemotherapy treatment which she was not looking forward to. Opening the parcel put a big smile back on her face for two reasons. firstly, because you had chosen as gifts exactly what she would have chosen for herself. But secondly and more importantly, because she realised other people ere also thinking of her and willing her to get better. People she had never met.
Thank you so much for the shopping vouchers, they will come in very handy. Thank you for helping my daddy to be himself again. Keep helping police officers because some people don’t understand how hard it can be and they are doing a great thing.
This act of kindness was greatly appreciated by us both at what is a very difficult time for our family.
© 2017 PFOA - Police Firearms Officers Association
Head Office: Chatteris Police Station, 18 East Park Street, Chatteris,
Cambridgeshire PE16 6LD - Tel: 01354 697 890
Email: info@pfoa.co.uk