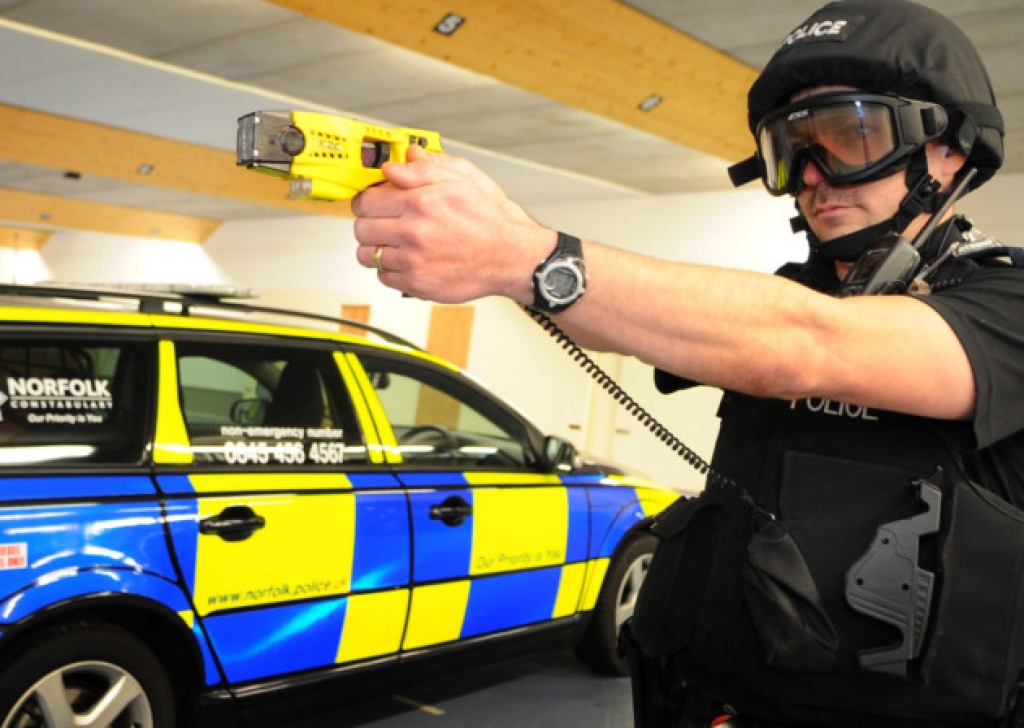 Every Norfolk officer could be armed with a Taser by 2021 – in response to the shocking news that there were 500-plus attacks on police in the past year.

Between April 2017 and March 2018 there were 518 assaults against Norfolk officers - including 136 that caused injury.

The alarming Home Office figures come months before the introduction of new legislation which will see tougher sentences for those who assault emergency service workers.

Norfolk’s chief constable Simon Bailey vowed that every officer in the county would be equipped with Tasers within the next three years.

Mr Bailey said: “The figures are bitterly disappointing and they really shine a light on the scale of assaults on police officers.

“I welcome the proposals to change the legislation to increase the maximum sentence for people who assault my colleagues and as chief constable I’m doing everything I can to reduce the number of incidents of assault.

“All officers have been provided with body-worn video which does act as a deterrent and we’re increasing the number of officers who are carrying Taser.”

Mr Bailey said over the next three years the force was hoping to equip “every officer who wants to carry a Taser” with one in the county.

He said:” It’s a real shame that it has come to this but I feel that I need to do everything I can to ensure my officers who are out every day serving the communities of Norfolk are able to mitigate the threat that is posed by a small minority of society who believe it’s all right to verbally and physically abuse my officers.”

Last year body-worn cameras were introduced to officers in Norfolk and Suffolk in a bid to provide them with protection as well as a means to gather better evidence about crimes that had taken place.

Acting Sergeant Dan Taylor, from the Norwich East Safer Neighbourhood Team, who was last year attacked by two women in separate incidents within the space of just a few hours, said he felt the cameras would help prevent future attacks.

He said: “I think body-worn video will help both towards a deterrent in most incidents and certainly when people are under the influence of alcohol or drugs and realise what they have done the next day.

“Having their footage replayed to them in interview there is no room for argument. The footage doesn’t lie and it’s often crystal clear both visually and audibly too.”

He added: “This will often help in court cases too where the courts can see/hear what’s been said rather than just reading from the officer’s statements, they can see and hear it for themselves.

“Over time I hope to see assaults on police go down but see tougher punishment for those that do assault emergency service personnel.”

The Police Federation has welcomed the introduction of the new law which will allow tougher sentences for offenders, saying that officers should not have to consider assault “just part of the job”.

The Assaults on Emergency Workers (Offences) Bill will be passed into law this autumn.

Under it, the fact that assaults are committed against emergency workers will be taken into account when sentencing offenders, potentially leading to tougher sentences.

John Apter, the chairman of the Police Federation of England and Wales, said: “Any attack on a police officer is unacceptable.

“And while I am glad that the ONS and the Home Office are improving their data collation regarding assaults on police officers I do not believe that these figures represent anywhere near the true picture of the level of violence our members face on a daily basis.”

Lorne Green, Norfolk’s police and crime commissioner, said he was doing his best, whether by trying to push for new legislation or by helping to provide new kit, like body cameras, to reduce attacks on officers.

He said: “I’ve said it before and will say it again. An attack on emergency workers is an attack on all of us because we rely on these people to keep us safe.”

AFO WSP welfare NPCC IPCC Welfare Support Programme illegal firearms ARV Terror attack Firearms Officers West Mids Police Protect The Protectors Mental Health PTSD Assault on Police Police Scotland Taser Armed Police Home Office Terror Threat wellbeing PFEW Metropolitan Police Armed Police Numbers PFOA
I have recently been medically retired from the police with PTSD following a serious injury on duty a few years ago. I would not be here if it was not for the PFOA - they literally saved my life. In February 2017 I was long-term sick off of work and I was in a very bad place. Whilst I have been unable to continue as a serving officer, I will forever be indebted to the PFOA. I will never be able to repay them for all that they did. All I can say is thank you so much from me and my family.
PFOA assisted by offering counselling/coaching support to officer’s family. A respite break was granted to allow the officer and his family to get away and spend some valuable time together as a family unit.
The PFOA purchased a new cross trainer and have loaned this to the officer to enable him to remain active and hopefully return to Ops.
PFOA arranges support for the officers involved prior to the Inquest and after by way of a respite breaks and NLP Coaching or Counselling.
I would like to personally thank the PFOA for the gifts we received for our daughter. The timing could not have been better. the week the gifts arrived, she had lost her hair and was due to go back to hospital for her next round of chemotherapy treatment which she was not looking forward to. Opening the parcel put a big smile back on her face for two reasons. firstly, because you had chosen as gifts exactly what she would have chosen for herself. But secondly and more importantly, because she realised other people ere also thinking of her and willing her to get better. People she had never met.
Thank you so much for the shopping vouchers, they will come in very handy. Thank you for helping my daddy to be himself again. Keep helping police officers because some people don’t understand how hard it can be and they are doing a great thing.
This act of kindness was greatly appreciated by us both at what is a very difficult time for our family.
© 2017 PFOA - Police Firearms Officers Association
Head Office: Chatteris Police Station, 18 East Park Street, Chatteris,
Cambridgeshire PE16 6LD - Tel: 01354 697 890
Email: info@pfoa.co.uk